As a scientist my research interests are in pure and applied biology particularly ornithology, ecotoxicology and forest ecology. The main focus of my research is to develop a deeper understanding of the impacts of environmental change and disturbance related to land-use change, climate change and environmental contaminants. I am also interested in the impacts of environmental change on industries such as food, forestry, environmental regulation, energy and on society. As an ornithologist I study all birds, and have focussed in particular on a few species of such as Dippers, Swans, Corncrakes, Choughs and Hen Harriers. Each of these activities requires resources and collaboration. Thus, while some of my research is low cost, much also requires substantial funding and has therefore been shaped, at least in part, by societal needs, and I have been awared in excess of €10 million for my research to date. Studies of environmental impacts require interdisciplinary approaches and collaboration with other scientists and stakeholders has been critical to the success of this work.…

ORNITHOLOGY
I have been studying the Dipper, a small river bird, for over 20 years. I have worked with a large team of researchers, ornithologists, volunteers and students in the first large-scale study of its kind in Ireland with considerable input from citizen science. Each year chicks are fitted with identification rings providing data on survival, dispersal and population trends. We have recorded a change in the timing of breeding as they now lay their eggs earlier than they had done previously. This was the first evidence of the impact of climate change on birds in Ireland and the long-term nature and wide scope of my research have made it possible to detect this type of environmental change. You can read more about this work here.

Having undertaken research for my PhD on Lead toxicity in Mute Swans I have continued to work with swans and, for many years, now I have been tagging them and recording their behaviour, health and habits in Ireland and Wales. I have published more than 20 research papers, and in one of these, published in the international journal Wildfowl, we described for the first time, the cause of pink coloration in swans which has been observed in many parts of Ireland, Britain and North America. This causes them to lose their waterproofing and consequently they cannot feed and may eventually die and impacts on populations of swans across their range.…

It was very exciting for me to be part of the discovery of a new species of shrew in Ireland. Whilst undertaking their post-graduate research, John Lusby, University College Cork and BirdWatch Ireland and Dave Tosh, Queen’s University Belfast, spotted the unfamiliar remains of Greater White-toothed Shrew Crocidura russula in regurgitated food remains of Barn Owls and Kestrels in Ireland. These are the first Irish records of Greater White-toothed shrew, and provide compelling evidence of a recent introduction of this species to Ireland. The potential impact of this new mammal to Ireland, which is absent from Britain, on the ecology of habitats in Ireland may be considerable and is the focus of continued research.

My studies of forest ecology and forest birds has included extensive work on the Hen Harrier, one of Ireland’s rarest birds of prey. I have led a number of research projects in this area which have produced a large volume of work on this bird species and its interaction with changing landuse, particularly forest expansion and wind energy development. More details on this work can be found here.

FOREST ECOLOGY
Between 2000 and 2015 I led the largest national forest ecology research project in Ireland which was undertaken in collaboration with Trinity College Dublin, Waterford Institute of Technology, Coillte, Forest Research UK, Swedish University of Agricultural Sciences and University of Alberta, Canada. This programme of research has been the single largest project on forest biodiversity in Ireland and has led to the generation of significant new knowledge on the ecology of range of forest species as well as the building significant critical research capacity through PhD and Masters training and the hosting of Marie Curie fellows. A large number of research papers, together with policy and management recommendations have been developed and translated to industry as part of this work. You can read more about some of these projects on the UCC PLANFORBIO and Forest Ecology Research web pages.

During the course of this research I was very proud to bring the Second International Conference on Biodiversity in Forest Ecosystems and Landscapes to UCC. This event showcased the excellent research being undertaken here in Ireland and brought more than 150 delegates from all corners of the globe to share their work. We hosted a range of networking events facilitating formal and informal opportunities for interaction. These included a field excursion to native woodlands across Munster where researchers from our team shared their experiences of forest ecology research in Ireland with international delegates.

ECOTOXICOLOGY
Global ocean temperatures, increased occurrence of extreme weather events (such as El Niño), as well as growing coastal eutrophication, have all been linked to an increase in the incidence of HABs worldwide. Our studies at Lough Hyne Marine Reserve were chosen to examine the possible effects of climate change on emerging naturally occurring toxins. Our studies are the first to detect Pinnatoxin G in Irish waters, highlighting the ongoing spread of this algal toxin, most likely due to climate change. Another natural toxin to animals is salt: as many animals carefully control the ions in their body fluids and tissues (some animals don’t control their fluids, these are called osmo-conformers). In doing these studies we hope to understand what the possible impacts of human induced contaminants might be for biodiversity and ecosystem function. My more recent work in ecotoxicology has focussed on the role of animals in determining the fate of plastics in our waters, particularly smaller nanoplastic particles that can impact negatively in less visible ways. We have found that a small freshwater crustacian, Gammarus duebeni, fragments microplastics as part of their digestive process, which has important implications in terms of the impacts of plastics on our environment.

OUTREACH
A priority for me during my research career has been the dissemination and translation of findings not only to a scientific audience and policy makers, but also to the wider public and the community. I have been a regular contributor to Mooney Goes Wild RTE Radio 1 show for many years. In January 2016 I had the opportunity to revisit a documentary which I presented and which was first broadcast in 2004 and to share updates on our recent work on swans. I have also contributed to Eco Eye, an Irish television series about environmental issues presented by Duncan Stewart, where I was invited as an expert on biodiversity in Irish forests in 2008, and again in 2010 as an expert on Hen Harrier ecology in Ireland. You can see some examples of this work by clicking on the links below.

In 2014 I was delighted to partner with the Lewis Glucksman Gallery at UCC to create an exhibition of animals in contemporary art entitled ‘Fieldworks‘. Featuring works by Irish and international artists, Fieldworks demonstrated how animals forage, nest and play within a variety of locations and offered a remarkable insight into life in often hidden corners of the animal kingdom. This exhibition featured a display of animal specimens, research materials and study materials used by scientists and an extensive programme of lectures, workshops, tours, courses and events. 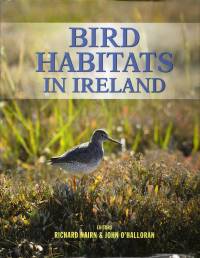 In 2012 I co-edited a book on the bird communities in different Irish habitats, which included contributions from 25 leading ornithologists and research scientists. This book was launched by Minister for Arts, Heritage and the Gaeltacht Mr. Jimmy Deenihan TD at a symposium at the RDS in Dublin in association with Dublin City of Science 2012. Each chapter was peer-reviewed by an international expert scientist and details case studies that show what can be done when scientific research is combined with practical land management. Since 1985 I have hosted the Cork Ornithology Research Conference at UCC every 5 years. This attracts researchers and members of the public from Ireland and the UK to review the latest research findings and to build collaborations for further research. The proceedings of these events is then published in the research journal Irish Birds. I have also made large contributions to international conferences and in 2009 was invited to chair the Scientific Committee of the European Ornithologists Union Conference in Zurich.

STUDENTS
Research students have always been an important part of my academic work and I have supervised or co-supervised 44 PhD students and 31 Masters Students to date (click here for details) as well as a large number of undergraduate and Masters dissertation research projects.

Further information on my research activities can be found in my IRIS profile which you can view here.